The tennis courses in “Luzhniki” are enrolling children with an elementary level of training.

The training sessions are supervised by the professional coaches of the “Luzhniki” sport complex with extensive experience.

As soon as the tennis courses in “Luzhniki” resumes work, the current training schedule will be published here.

To clarify information and register for the tennis courses please contact the coach Alexandra Nikolaevna Cazanova.

A tennis school of a higher skill level has been successfully operating in “Luzhniki” for 27 years.

Our tennis school starts enrolling children who were born in 2014 - 2015 to the preparatory group. The selection will take place on September 4 and 8, 2020 at the Small sports arena (Luzhniki St. 24, building 11) in “Luzhniki”. Starting at 1 pm.

From August 3, 2020, there is also an additional viewing of children who was born in 2009 - 2012. We invite children who already have playing and competitive experience.

Viewing takes place on the tennis courts of the Sports Town at Luzhniki St. 24, building 11.

All training sessions in our tennis school are supervised by professional coaches with extensive experience.

- Master of sports of the USSR, "Honoured coach of Russia" in tennis - Lyudmila Grigorievna Busurina.

- Master of sports of the USSR, "Honoured coach of Russia" in tennis - Irina Grigorievna Granaturova.

- Master of sports of the International Class in tennis, "Honoured coach of Russia" in tennis - Elena Grigorievna Granaturova.

In addition to four tennis coaches, the school has a general physical fitness coach and a sparring coach.

Our tennis school trains more than 50 athletes aged 5 to 14. Our groups:

“Luzhniki” tennis school was awarded with “Russian Cup” in “the Best Children's Sports School in Russia” nomination. As a result of selection from the initial training group in 27 years time of its work been prepared:

- 3 Honoured Masters of sports of Russia

- 12 Masters of sports of Russia

- more than 20 Candidates for Master of sports of Russia

2005 - as a member of the Russian national team, Vera Dushevina won “Federation Cup” and was awarded “Russian Cup” in the “Team of the Year” nomination.

2008 - Ekaterina Makarova and Alla Kudryavtseva won the “Federation Cup” as part of the team.

Four pupils of our tennis school were awarded the “Russian Cup” in the “Discovery of the Year” nomination. Also, eight students received grants from the Boris Yeltsin Foundation for high performance in ITF tournaments till 18 years old and successful performances for the Russian national team.

2013 - Sofia Zhuk and her coach L.G.Busurina became the applicant for a grant from the Boris Yeltsin Foundation.

2012 - Sophia got to the final of the most prestigious American tournament "Eddie Herr Championships" in single category and won in mixed. During her performances, she won several prestigious tournaments and became holder of the title World Junior Champion.

2015 - Sophia Zhuk became the winner of the junior tournament at “Wimbledon”. She is the second representative from Russia, who submitted the tournament in London. Only Vera Dushevina won at the junior “Wimbledon” in 2002 before her.

2016 - Daria Fraiman and her coach E.G. Granaturova became an applicant for a grant from the Boris Yeltsin Foundation.

More than 10 students of the tennis school received and continue to receive free higher education in the USA, England and France, playing for the sports team of their university. 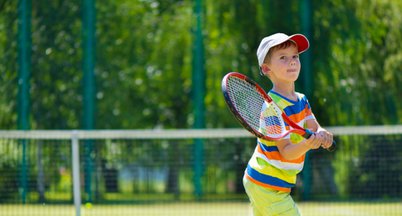 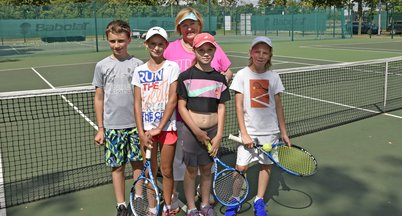